Machu Picchu: one of the 7 Wonders of the World was built by the Incas

Human beings have built wonders since the beginning of time, demonstrating not only their ability to survive, but also their good taste. Thanks to the work of thousands of people it was possible to build monuments as impressive as the 7 Wonders of the World. In ancient times there was already talk of these majestic works of civilization – the Colossus of Rhodes, the Lighthouse of Alexandria and the Mausoleum at Halicarnassus were some of the most famous 7 Wonders of the Ancient World.

Although there is now little or nothing left of these magical places, not everything is lost – imposing wonders worthy of being seen at least once in a lifetime are still standing, and many of them are on the bucket lists of millions of people around the world.

These impressive examples of human talent have given rise to the 7 Wonders of the Modern World, chosen by one hundred million people during a public and international contest held in 2007 that aimed to find the new wonders of humanity.

From Pre-Columbian Jewel to World Attraction

The Wonders of the Modern World chosen were Christ the Redeemer in Brasil; the Great Wall of China; the city of Petra in Jordan; the Taj Mahal in India; the Coliseum in Rome; Chichen Itzá in Mexico and, of course, the fascinating citadel of Machu Picchu, located at the gateway to the Cusco jungle, in Peru.

The charm and magnetism of the extraordinary Inca city came out ahead of true architectural miracles such as the Acropolis of Athens, the Alhambra of Granada or the Eiffel Tower of Paris, thanks to millions of votes from all over the world.

This was how the already powerful attraction of Machu Picchu reached more people all over the planet, becoming the Latin American tourist jewel par excellence. Thanks to its incomparable charm, it has also received visits from famous people, who had Machu Picchu at the top of their bucket list – the poet Pablo Neruda, the King of Jordan, Abdullah Al-Hussein, the revolutionary Ernesto “Che” Guevara, as well as contemporary artists such as Beyoncé, Jim Carrey, Cameron Diaz and Zac Efron, are some of the celebrities who have been amazed by Machu Picchu.

The Story of a Wonder

Built during the reign of the Inca Pachacutec (15th century), the citadel is divided into two important areas: the agricultural part and the urban part. While the first comprises a vast network of platforms or artificial terraces, the second is made up of various buildings and squares which include the Temple of the Sun, the Temple of the Three Windows, the Main Temple and the Temple of the Condor.

The majestic Inca citadel is surrounded by temples, terraces and water channels, and was built at the top of a green mountain, characteristic of a region known as the “eyebrow of the jungle” (the boundary between the jungle and the mountains). It was built with large blocks of stone, joined together without any kind of filling material.

Nowadays, it is considered to be Cultural Heritage of Humanity because it is recognized as an important political, religious and administrative center of the Inca era. Its buildings follow the classic Inca style: buildings with stone walls polished in a rectangular shape, joined together without the use of filling materials, and trapezoidal doors and windows. 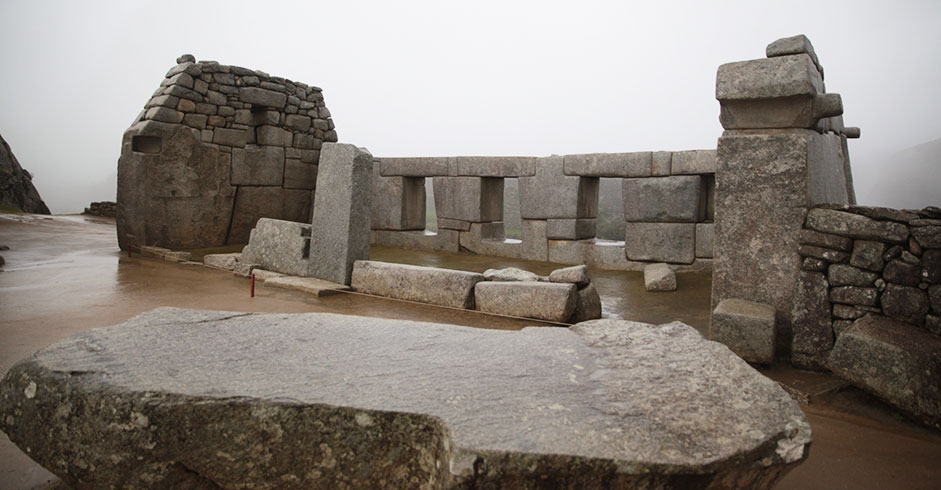 • Its temperature varies between 6.2° and 29.5°, since it is located in a subtropical zone. Its rainiest months are from November to March.
• Its majestic architecture comprises some 140 structures throughout the citadel.
• The average altitude of the citadel is 8,040 ft above sea level.
• Machu Picchu was declared “Historic Sanctuary of Peru” in 1981.
• Machu Picchu Opening hours:
• Entrance: from 06:00 to 16:00.
• Open until 17:00.

Getting to Machu Picchu

Many people going to Machu Picchu choose to enhance the experience by retracing the steps of the ancient peoples on what is known as the Inca Trail.

Nowadays this has been hugely commercialised, and whilst this doesn’t detract from the experience, it does mean there is a vast and potentially daunting amount of options available. These range from short treks easily walked by most, to week-long hikes that take you into the depths of the surrounding jungle and can even incorporate zip-lining and white water rafting. The prices vary hugely depending on what the package includes and it’s definitely worth shopping around.

For the less adventurous, mini bus and train services can get you to Machu Picchu both cheaply and easily. Almost everyone going to Machu Picchu will pass through the town of Aguas Calientes (lit. Hot Waters), however if you don’t want to do any walking at all it is necessary to get here by train due to the lack of roads.

Once in Agua Calientes you can either take a bus up to Machu Picchu, costing around US$18 each way or take the reasonably short walk. It is a very obvious and well trodden path, however is entirely uphill and unfortunately offers little chance to view any scenery. The walk from Aguas Calientes to Machu Picchu tends to take around an hour.

Thoughtful thoughts to your inbox